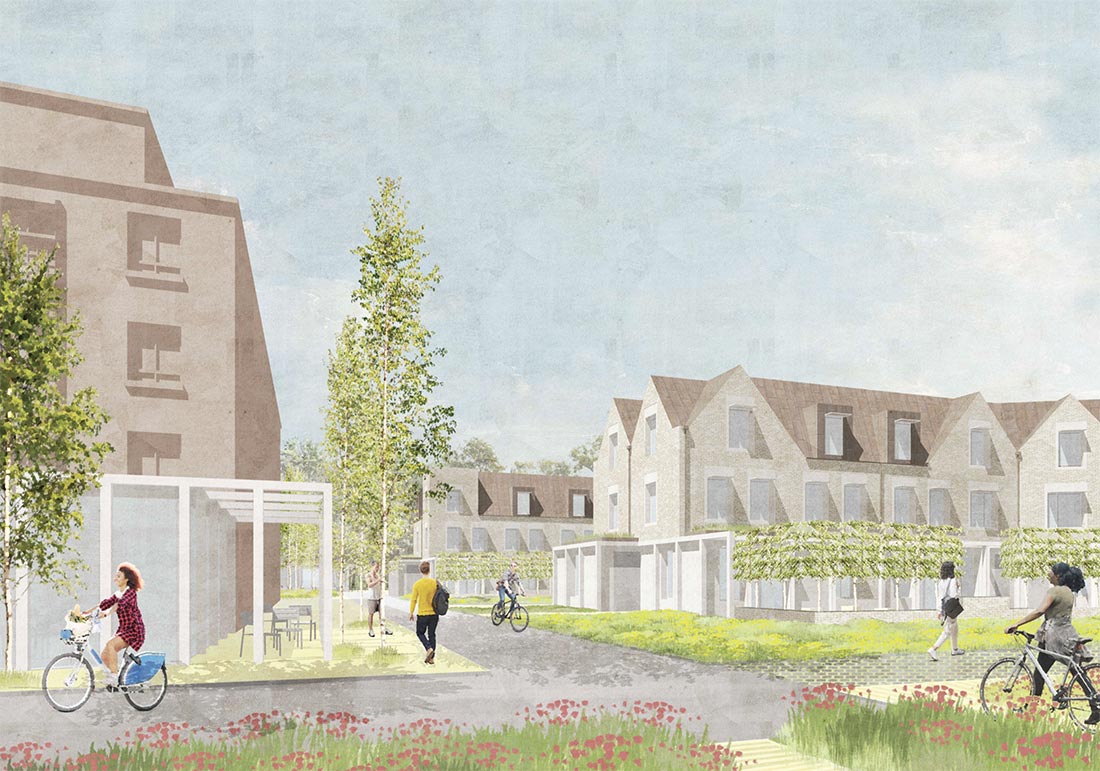 Our proposals will deliver 60 new student rooms spread across 13 terraced homes, with a mix of four and five bedrooms. The homes will be connected in up to four different blocks, creating a terraced effect that is consistent with the surrounding area.

This page provides further details of the proposals. Please click on the header below to display more information.

The emerging masterplan for the site can be viewed in the image below.

In addition to providing additional postgraduate student housing, the proposed development will enhance existing buildings through the provision of additional amenity spaces. 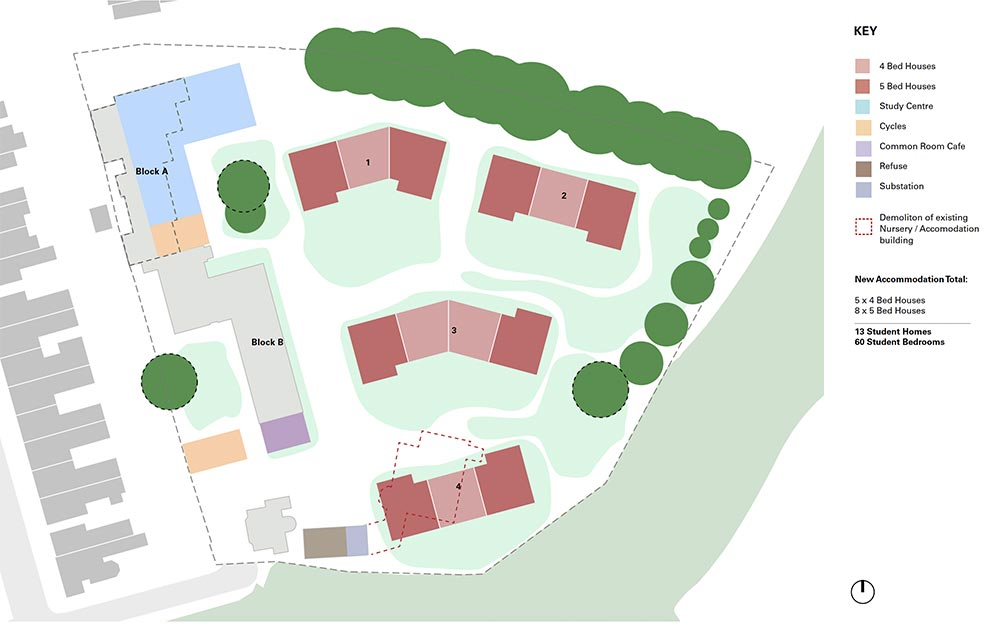 The new homes will be designed to create a sense of community and encourage interaction, whilst also providing individual identity within each home.

Each block will feature a mix of four and five bedroom houses, providing a total of 60 bed spaces spread across 13 terraced homes. 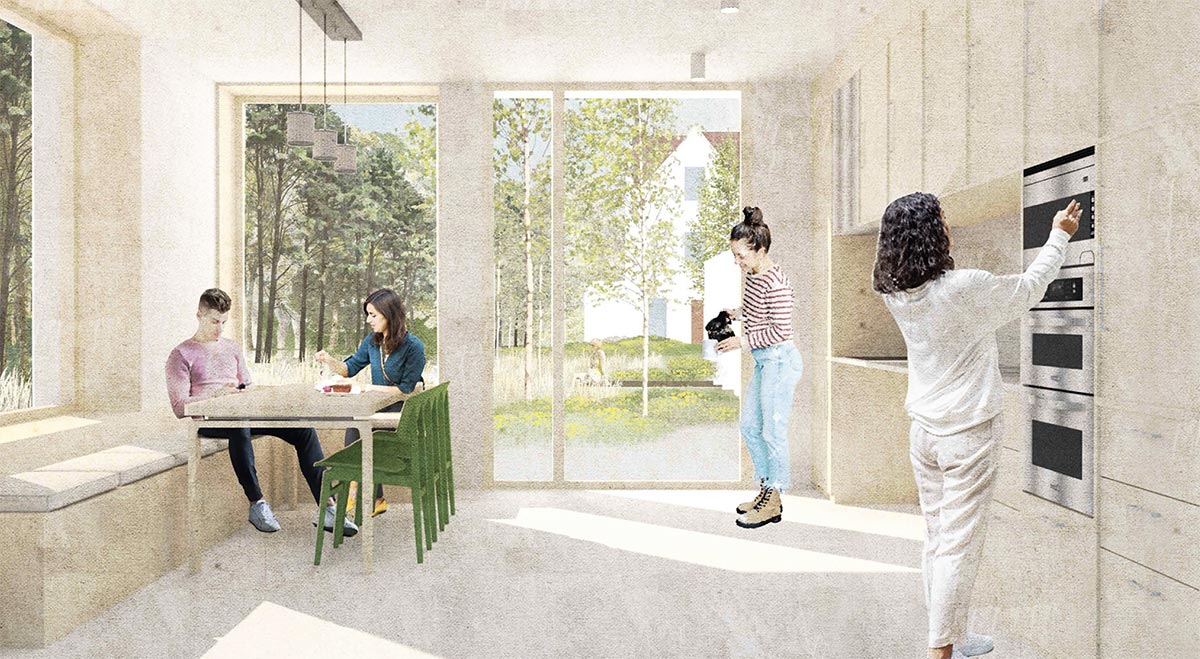 As part of the wider masterplan, the proposed development will provide spaces for students to collaborate, work and unwind to supplement the living areas.

This proposed amenity spaces include a student study centre, seminar room and gym in Block A. A new single storey building will be attached to the south end of Block B to be used as a café for the site. Further cycle parking will be provided to the west of the café.

We are proposing to create a community of homes which enhance the wider site and blend with the local environment. In developing the preferred layout and massing of new accommodation on the site, a series of options were considered and tested in relation to the site constraints and characteristics of the surrounding area. Some of these are illustrated by the images to the right.

The option we have chosen to take forward involves a scaled back proposal which includes less accommodation to take account of the constraints of the site including the proximity of the nature reserve; it also allows us to provide a greater level of amenity.

The following design principles have been incorporated into the final design to create a scheme which utilises the available space, draws on the surrounding environment and integrates a sense of home ownership: 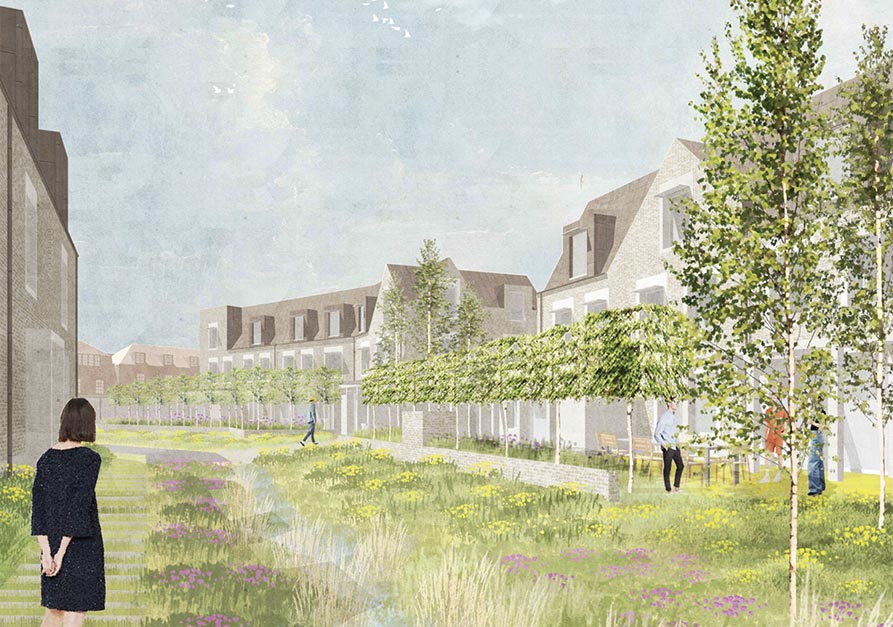 The design of the proposed development directly takes it inspiration from the original Owlstone Croft House and local properties in the surrounding area.

The College sits in the heart of the Newnham community which is characterised by traditional two and three storey Victorian terraces faced with brick and stone detailing. The design details of the proposed student houses are inspired by the local character and will feature gables and subtly varied brickwork details. 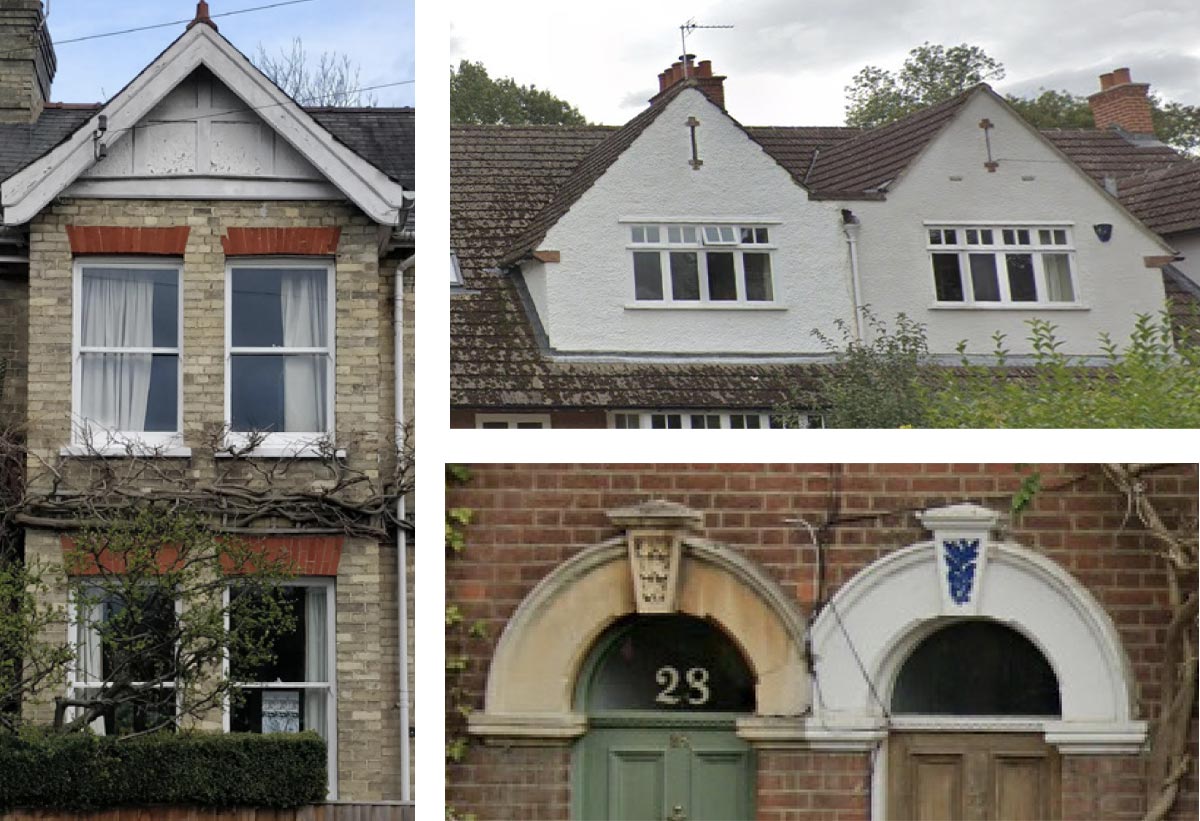 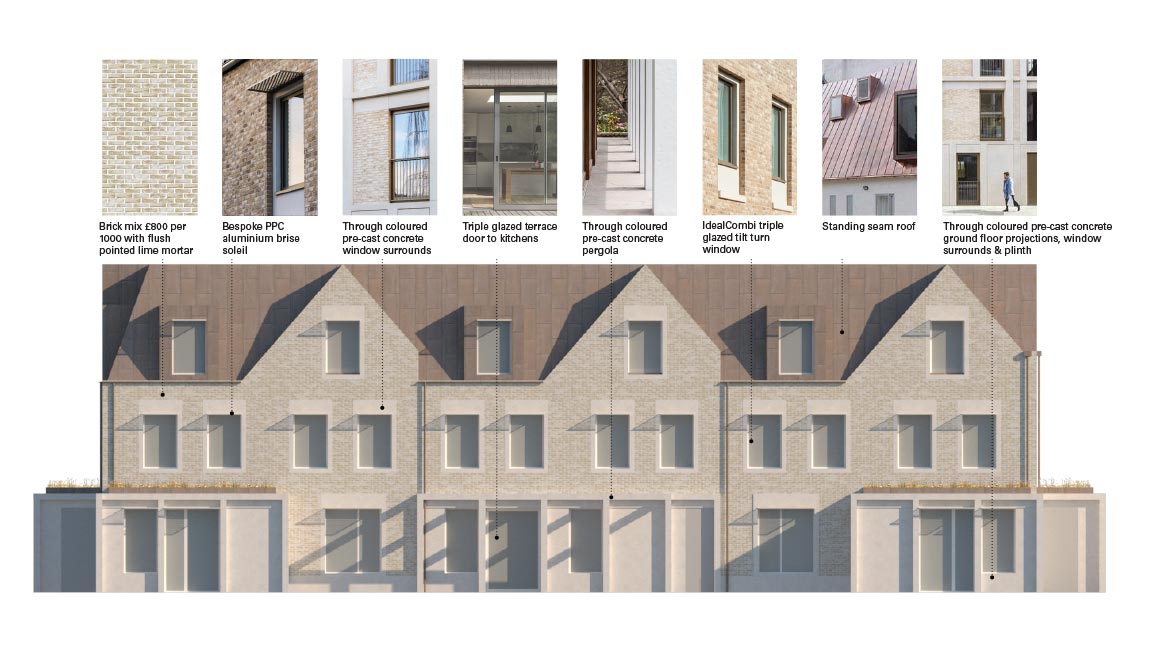 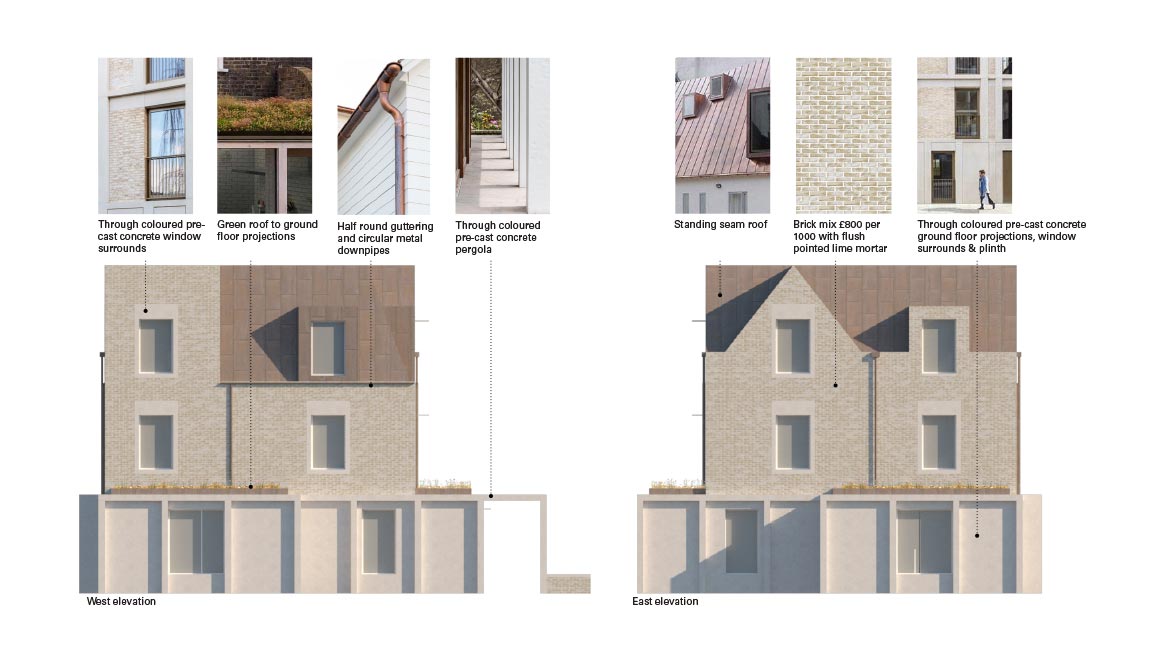 One of the guiding principles of future development at the Owlstone Croft site is to provide housing that prioritises student well-being while also incorporating sustainable buildings that address the challenges posed by climate change.

Mikhail Riches have extensive experience in the creation of sustainable designs, having received the 2019 Stirling Prize for designing Goldsmith Street in Norwich City Centre, the largest Passivhaus scheme in the UK. Passivhaus buildings provide occupants with a high level of comfort while using minimal energy for heating and cooling. The new postgraduate terraces will be built to Passivhaus standard and will be ‘carbon zero’ in operation. The layout of buildings is being orientated due south for passive solar design.

The existing buildings will also be significantly upgraded in terms of their environmental performance. PV panels will be located on the roofs of the terraces and each house will be heated with Air Source Heat Pumps. 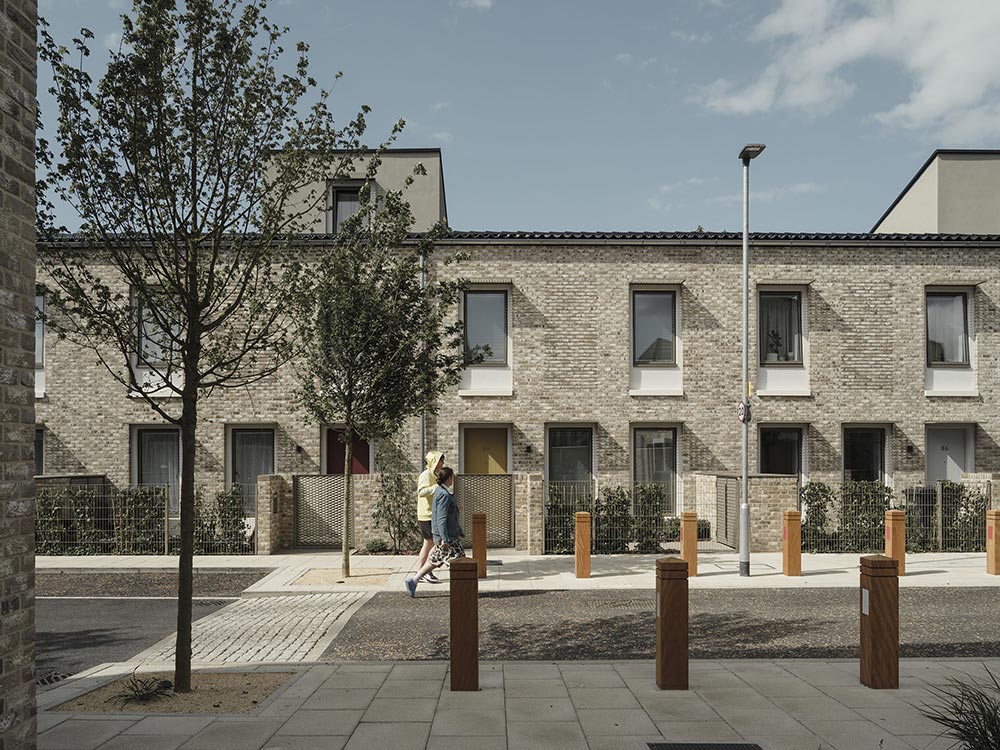 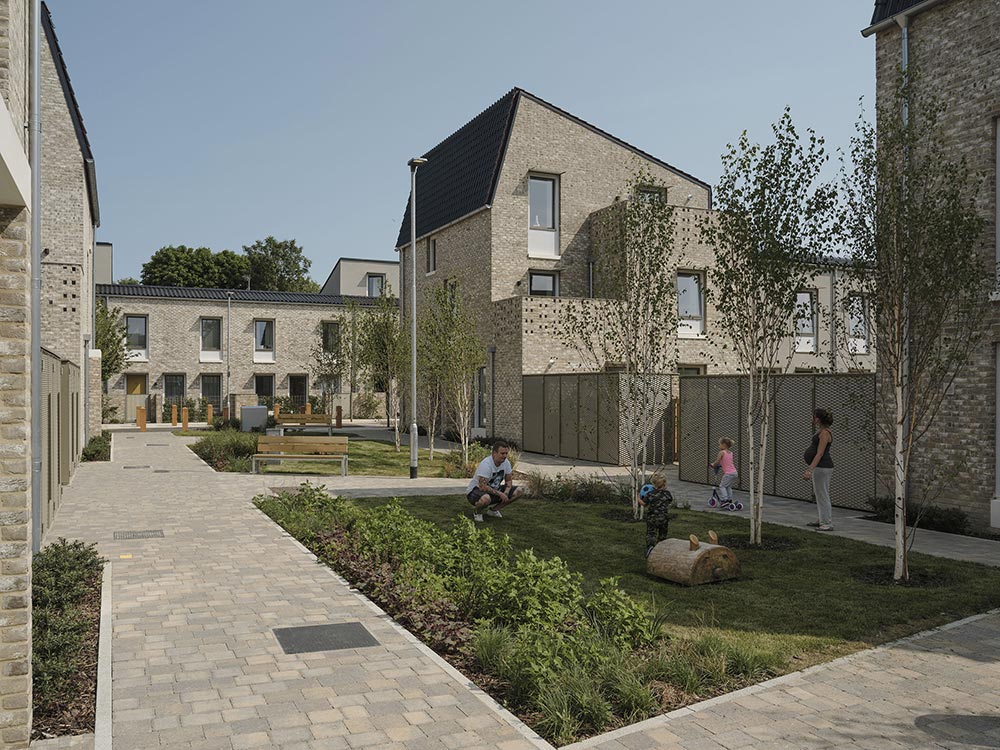 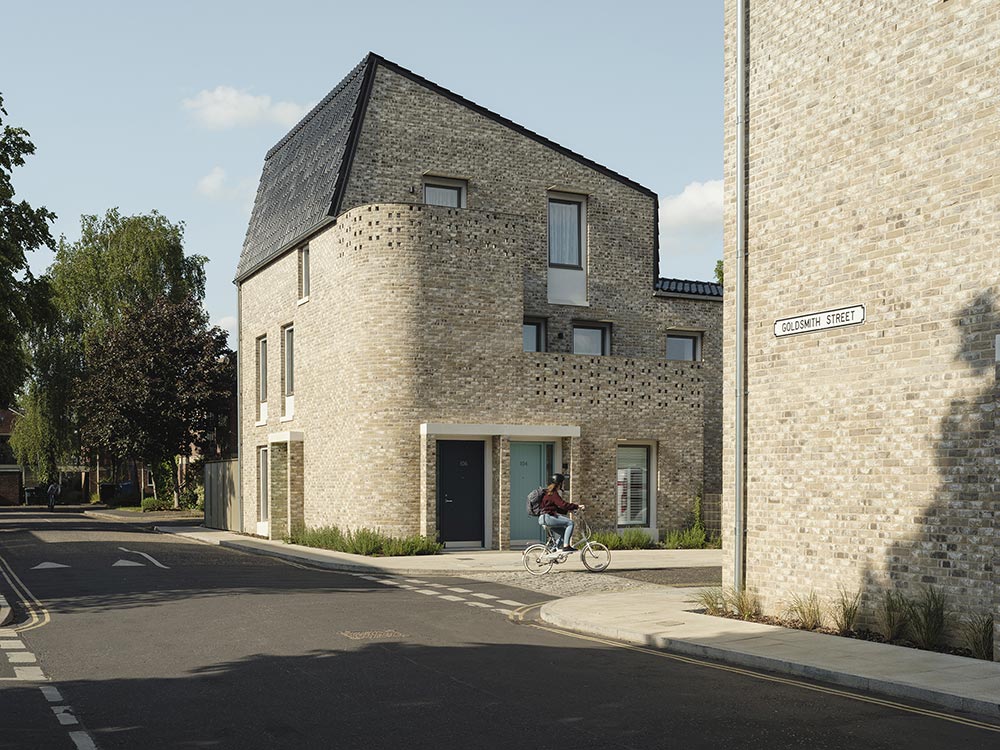 + / -Landscaping and the environment

A critical component of the design process is ensuring that the scheme is fully integrated and responsive to the surrounding environment. By incorporating elements of the neighbouring nature reserve into the site, such as wetland and woodland features, the landscape plan has integrated the character of surrounding natural features.

The landscape strategy also seeks to reference echoes from the past, through the inclusion of diverse outdoor spaces such as courtyard areas and secret gardens, creating semi-private areas for discovery. The courtyard spaces will be incorporated into the building design, with terraces opening out onto the open spaces. 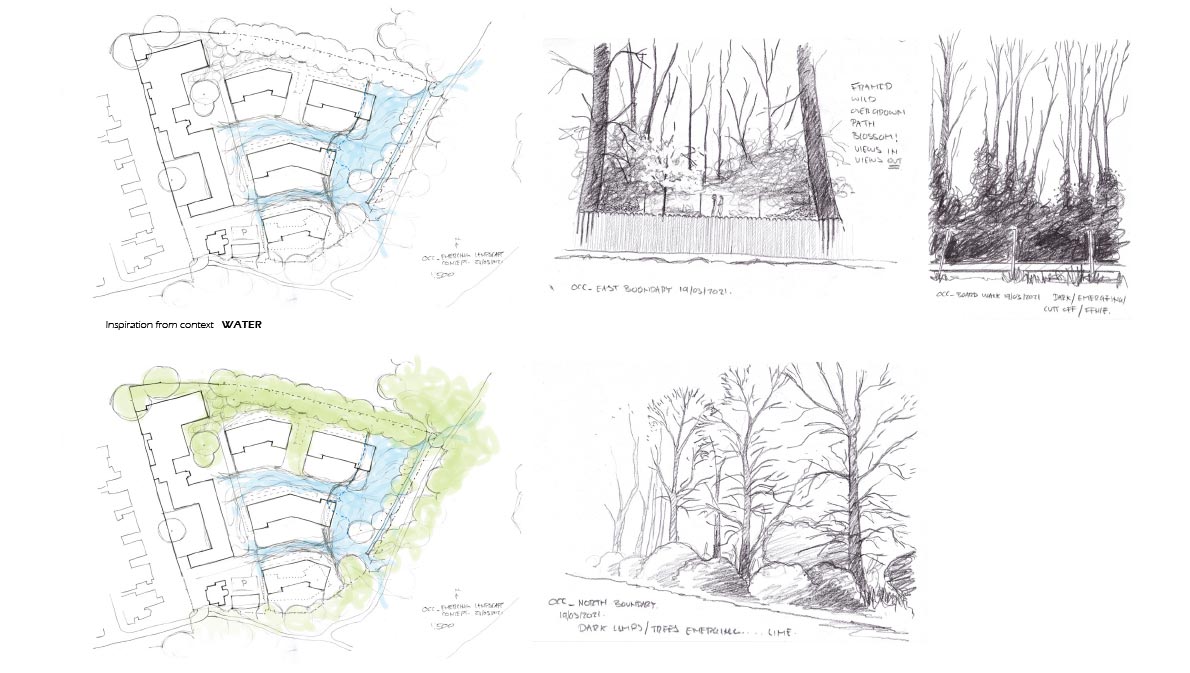 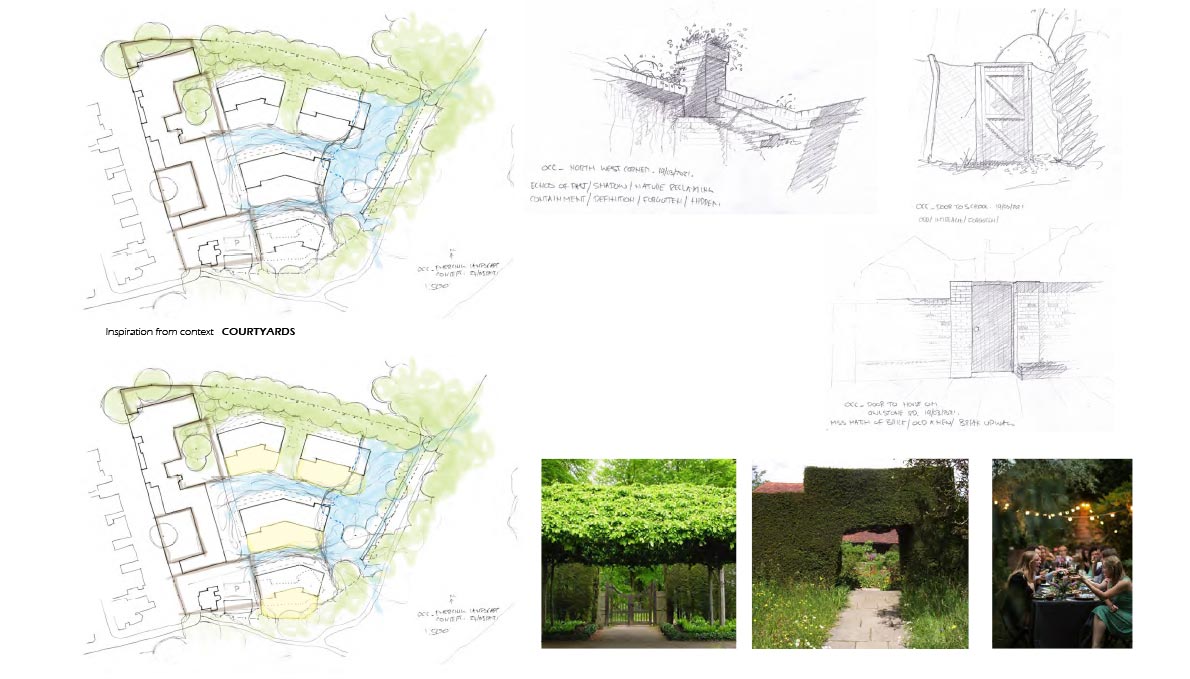 The increase in biodiversity is largely due to the creation of grassland habitats on site, including bee lawns and damp grassland, and the retention and enhancement of the hedgerow with trees along the north site boundary. Simple biodiversity enhancement features, such as the green roofs and rain gardens, also contribute to the overall net gain for biodiversity.

Bat roosts in the existing garages will be retained and new bird and bat boxes will be included to encourage new habitats.

In response to concerns regarding the impact of lighting on the adjacent nature reserve, subsequent discussions between the College and the council's ecologist were held and a Lighting Impact Assessment was undertaken.

It was agreed that a maximum lux level of 0.5lux around the edge of the site was required to protect identified bat species. A lux is a standardised unit of measurement of light level intensity. A measurement of 1 lux is equal to the illumination of a one metre square surface that is one metre away from a single candle.

The College commissioned a detailed Lighting Impact Assessment to account for a 'worst-case scenario,' assuming that every possible light source is turned on. It should be noted that this exercise disregards any existing or proposed planting.

The preliminary exercise revealed that current light levels significantly exceed the 0.5 lux figure at one measurement point. When the proposed development was modelled, the average lux level around the boundary was less than 0.5 lux, but this figure was slightly exceeded in some places. As a result, the desired lux levels in the rooms were reduced to lower levels which are deemed appropriate and workable, and have been approved by the College. The results showed that when the room was remodelled, the average light level was less than 0.5 lux, and this target was never exceeded.

The surrounding planting will also add a level of filtering to reduce the impact of lighting and it is highly unlikely that every light source will ever be switched on at the same time. The detailed studies therefore show that the light levels will not harm the ecological value of the nature reserve.